Phil Sr. supervising work on his cable tool drilling rig on one of his wells on One Mile Hill east of Albany, Texas.

When Kendrick Oil and Gas got its start in 1918, Woodrow Wilson was president, Wyatt Earp was still alive, the nation was still in the throes of World War I, the “Old” West was hardly more than a few decades old, and the oil business was a far cry from the super-sophisticated, high-tech, cutting-edge industry that it is today. It was an era when wooden derricks were the only kinds to be found. When cable tool rigs did all the drilling. When gushers were still the mark of a big strike and oiled roads “paved” the way to many a remote well site.

While working as an Internal Revenue Agent in Wichita Falls, Texas, Phil Kendrick, Sr., believed he could hold his own with wildcatters who were making strikes elsewhere around the oil-rich state. Less than 10 miles to the north, in Burkburnett, Texas, the famous Burkburnett oil boom had begun in 1912 and would peak in 1918. That boom, which was later celebrated in the famous feature film Boom Town, starring Clark Gable and Spencer Tracy, was one of the richest in Texas history.

As impactful as that strike was, it would be followed by one that eventually would be even larger. Phil Kendrick, Sr., made a discovery that would come to be known as the Northwest Extension of the Burkburnett Field. The image displayed at the top of the home page of this website shows the Northwest Extension, also known as the Burk-Waggoner Pool, in its heyday. The accompanying photo shows a detail from that image, and in it there appears (alongside the farmhouse) the well that Phil, Sr., drilled that launched the boom. 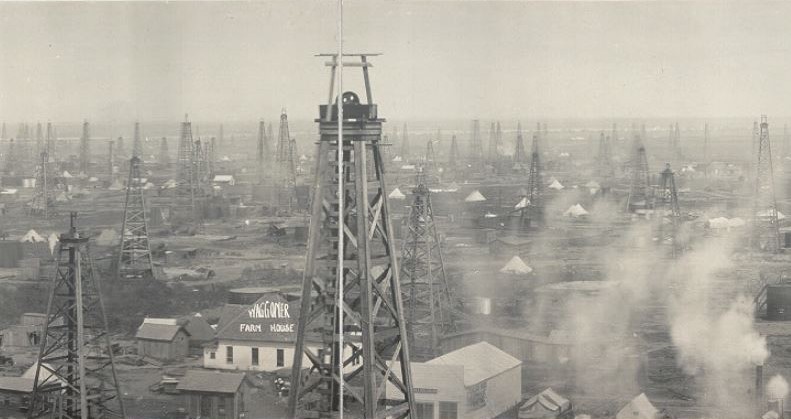 To get that well drilled, he had to raise money. “He and some of his buddies put together a stock company, and they called it the Burk-Waggoner Oil Company,” says Phil, Jr. “It was so named because the 160 acres of the original lease were owned by a farmer whose name was Burk Waggoner. They [Phil, Sr., and his friends] printed stock certificates. And they sold them on the street corner.” He laughs. “You could do that back then. They raised funds to pay off the lease and to get the well drilled. But they didn’t raise enough money, because they didn’t anticipate all the trouble that they were going to have. They ran out of money, and so then went back and sold some more stock.”

Once they raised a sufficient amount of funding, they could complete the drilling. “And finally they got it down to 1,700 feet. And that’s when it came in. At 4,200 barrels a day.”

It was a gusher. The huge volume of oil had to be captured in big pits dug into the earth. The discovery would spawn other activity, until the area around the Burk-Waggoner farm came to look as it appears in the photo.

Oil strikes continued to move westward—the Permian Basin had not yet registered as a major discovery—but there between Burkburnett and the Permian, there in the hilly country around Albany, Texas, the Kendrick family went to work adding to a legacy that will soon enter its second century.

Phil, Sr., was a rancher and the family ranch was located just three miles south of Albany. A couple more decades would pass before Phil, Jr., would joined his father in the oil business, but soon enough both were oilmen—Phil, Jr., independently drilling his first well when only 24 years old.  Jack Q. Frizzell, an Abilene oilman who knew Phil, Sr., as well as Phil, Jr., recalls that the Kendricks became the experts on oil prospects around Albany.

“They knew the geology well, particularly where they had that shallow production in Jones and Shackleford County,” Frizzell says. “They really kept that going and had great success up there.” 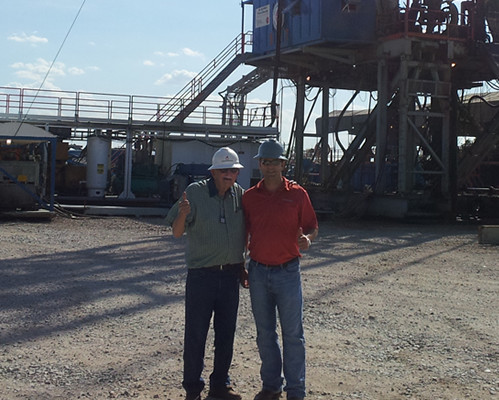 According to statements posted by PRNewswire in 2012, Phil, Sr., discovered oil in 1955 in a multi-zone field on what is now called the Perry Lease. The lease gets its name from the Perry family—the same family that produced the current governor of Texas, Rick Perry. The governor and his family are still the royalty/mineral owners of the lease.

From the year 1955 on, Kendrick Oil drilled more than 80 wells in the area and to this day there is still production from six of the 12 zones. All along, Phil, Sr., encouraged his son to work deals independently as well as with Kendrick Oil Company, so Phil, Jr., learned every aspect of the business just as his father had.

In the late 1960s Phil, Jr., took up a career on Wall Street working in the financial markets. Upon encountering a report from Chase Manhattan Bank that predicted that oil would rise from $2.80 a barrel to $5 a barrel within five years’ time (this was during the 1970s) Phil made plans to get back into oil. He returned to Abilene, having put together an investment group that would fund the start of Harken Oil Inc., which would later become famous for its partnership with the Bush family. When George W. Bush purchased the Texas Rangers, he did so by selling his stock in Harken Oil. Harken Oil and Gas, headquartered in Abilene, would eventually employ 125 workers.

Harken found favor with the Wall Street investment firm Merrill Lynch, which invested tens of millions of dollars in the Abilene-based entity, funding not only portions of their Texas operations but a huge Australian venture that covered literally millions of acres in the Australian Outback.

That phase of Phil Kendrick’s life would occupy him until the mid-1980s, when Phil would sell his interests in Harken Oil and he would resume his activities at Kendrick Oil Company. His father Phil Sr. had a stroke, which forced his retirement. Phil has been there ever since.

His son Michael joined the firm in a permanent capacity some four years ago and now serves as vice president of operations. Today the company operates wells in Texas and Oklahoma, either as operators or as non-operating working interest owners.  The company always stands ready to welcome new partners, either as investors or as companies who might extend drilling prospects and investment possibilities of their own. If you wish to visit with either of the top executives in the firm, see the Contacts page on this website.